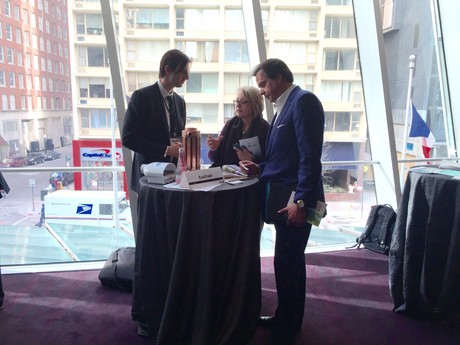 Executives from McDonald's and their suppliers discussing energy efficiency in the food service industry with David Velan of Ecodrain.

Ecodrain was selected as one of 10 companies to present at a McDonald’s Innovation Café event.  In attendance were supply chain, innovation and sustainability executives from McDonald's as well as leaders of its key suppliers. Organized by Sandbox Industries, a venture capital firm that manages more than $420 million of strategic investments, the event was designed to inspire new ideas and innovation at McDonald’s, as well as identify potential partners.

David Velan of Ecodrain introduced McDonald's to the potential for saving energy in its operations by reusing the energy in warm waste water. As a rough estimate, McDonald's spends $23-$27 million per year on gas to heat water in its US operations ($41 million per year at gas prices during the peak in 2006-2007 before the boom in natural gas production) and it could save 50% using standard sized ecodrain food service heat exchangers based on independent testing. It was also estimated using a calculator on the EPA website that the energy consumed heating water in each McDonald's restaurant is roughly the same as having two cars on the road for a full year.

McDonald's Good Planet initiative has established aspirational goals for increasing the energy efficiency in company owned restaurants by 20% by 2020 as well as increasing energy efficiency through restaurant standards. It is exciting to see McDonald’s taking a leadership role in sustainability of the food service industry. As the world's largest chain of hamburger fast food restaurants, serving around 68 million customers daily in 119 countries across 35,000 outlets, it has enormous potential to advance initiatives in the food service industry.