The shower is a sanctuary – a place to relax and to think.  But when engineers take a shower, sometimes they just think about the shower itself.

And so, our story begins in the shower with an engineer looking down and wondering how much heat energy was flowing down the drain.

Turns out, it’s quite a lot because ordinary water has some extraordinary properties.  Water can absorb more heat than almost any other substance on earth.  Put another way, it takes a lot of energy to make water hot.  It’s the reason why:

Given these facts, like any good engineer, he decided to search for a solution to capture the heat energy from the water flowing down his shower drain.  Unfortunately, after an extensive search, he found no easy answer because, as ecohome magazine points out the primary design challenge associated with drain water heat recovery is space.

The problem is that, although the idea of capturing heat from wastewater is attractive, the realities of incorporating this technology into a home can be challenging.   That’s because drain water heat exchangers can only be installed along the drain line, which is typically found in tight spaces – either against the walls, between joists under the floor or in other confined spaces.

A further complication was that, due to the limits of the technology at the time, heat exchangers could only be installed on perfectly vertical sections of the drain line.  For our engineer, this meant installation revolved around the location of the vertical drain line, rather than other considerations such as the proximity to the shower, or the cost and convenience of installation.

While this seemed like a limiting and difficult way to install a heat exchanger, the cost of doing nothing was highlighted every month when our engineer received his electric bill.  Perhaps the most frustrating part was, realizing just how much energy he was wasting, our engineer could no longer enjoy taking hot showers.

Finally, he decided to do something about it.  He assembled a group of experienced engineers and designers. Together they made it their mission to build a high performance heat exchanger designed to work flexibly with everyone’s existing plumbing and available space.

They decided it would have to meet the following criteria:

Below is the story of their quest to bring the shower into the modern, energy efficient, and resource conscious world.

Getting our feet wet (so to speak)

Building a device that can work universally is much more complicated than turning a vertical heat exchanger on its side.  If you were to do that, you would discover that performance suffers because the surface area of contact between warm drain water and cold fresh water is limited to the bottom of the device.  This means it uses only about 1/3rd of its surface area and is not very efficient. 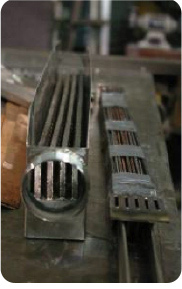 So the challenge of building a horizontal heat exchanger became how to maximize the surface area of contact between the drain water and the fresh water while considering the limitations of how drain water flows in horizontal pipes.

With this in mind, the first EcoDrain prototypes were made of stainless steel.  The internal heat exchange system consisted of a set of fins directly inside the drain water.

But, many items on our checklist remained.

Doubling the walls and breaking down the barriers. 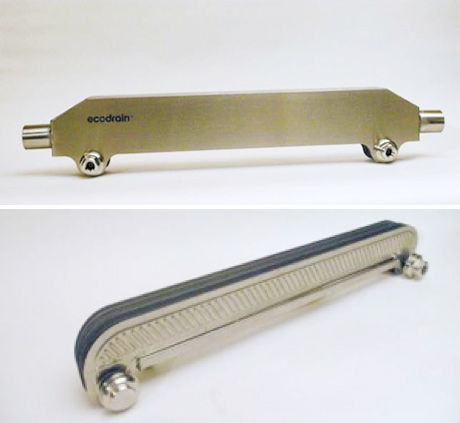 With our proof of concept established we set out to make improvements.

We used this design to present the product at a trade show and to gain valuable feedback from homeowners, builders, plumbers and municipal officials.

The design generated a lot of buzz and EcoDrain was written about in the New York Times, and Popular Mechanics.  Engadget, the well-known consumer technology web magazine, wrote: “File this one directly in the ‘why didn't I think of that?’ folder”.  While this praise was gratifying, we weren’t yet satisfied.

Our next objective was to find a way to increase the effectiveness of the heat transfer.

In our testing we had discovered that generating turbulence in the cold water was a key to increasing the heat transfer.

So we began our experiments with turbulence generating inserts called turbulators that were separate from the outside geometry encasing the cold-water channel.

One such turbulator is depicted here.

Our first turbulators resembled an Archimedes screw.  We varied the pitch and number of entries into the screw.  We even built a special machine out of rotary saws to cut bars of plastic into screws.   As the designs became more and more complicated, we started using a 3D printer to make the turbulators.

We soon experienced first hand why understanding turbulence is difficult.  Although we began each experiment with what we thought was a sound engineering concept backed up with extensive calculations, the initial excitement and confidence we felt as we rushed to the test facility was often followed by disbelief when the performance would be lower than expected.

We needed to change our approach.  We needed to find a faster way to iterate and test designs.  So, we built heat exchangers that allowed us to insert and remove different turbulators without starting over each time.

After countless experiments we found a design that amazed us – it was one of our biggest ‘eureka’ moments.  With it, not only did the heat transfer increase tremendously, it did so with little pressure loss.

Once this was complete, we built our first set of finished prototypes.  These prototypes met all of our performance criteria but we needed to make sure everything was of the highest quality and reliability. 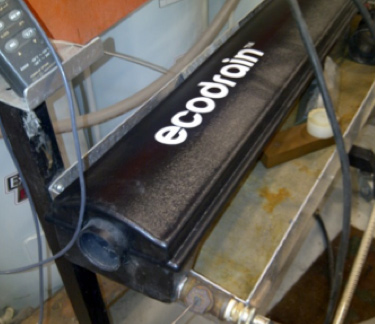 We did extensive life cycle testing on a simulated shower in our test facility, taking every opportunity to abuse and overwork the device.  In the span of an average workday, we would simulate 50 standard 10-minute showers.   This allowed us to conduct the equivalent of a lifetime’s worth of daily showers.

In the end, it took over 4700 experiments and modifications to finalize EcoDrain, but we are now confident in EcoDrain’s performance as well as in its reliability.   Most importantly it’s a product that many people can install easily. 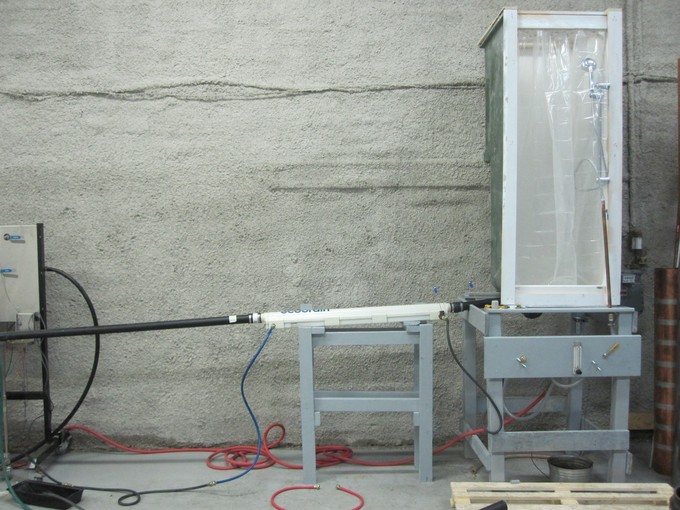 Our story began with an engineer in the shower asking a simple question.  But EcoDrain is part of a much bigger story.  It’s the story about people taking action to improve ordinary, everyday processes so that everyone can benefit.

In the process of developing our horizontal technology, we realized that vertical drain water heat exchangers could be improved upon by adapting our technology. We developed a second generation of our turbulator, and fitted it into a series of tubes on the outside of vertical drain line. This resulted in high performance, low pressure loss, and the use of less copper. This development lead to our V1000 vertical DWHR product line and furthered our mission of developing the most advanced drain water heat exchangers in the world and offering a complete line of solutions so that as many people as possible can benefit from saving energy with drain water heat recovery.

The next chapter of this story is being written by homeowners, as well as the developers, builders, plumbers, architects, and engineers who are working towards dramatically improving the performance of our homes and buildings.

We hope you too will get involved and help make a difference.